Medicine shortages and poor equipment have been key challenges for the Sierra Leone-China Friendship Hospital, and have restricted its development for many years. Shortly after the hospital, along with Sierra Leone’s Health and Sanitation Ministry, put forward a request for support, the Chinese government got involved. The Chinese government decided to donate medicine and medical equipment on a yearly basis, intending to improve hospital conditions and provide the patients with comprehensive treatment.

A remote pathological diagnosis platform for the Friendship Hospital was launched, to better support the hospital's development and treat patients, and marked another step in the development of primary healthcare.

The Chinese Ambassador to Sierra Leone, Wu Peng, said the platform would not only allow health experts to diagnose patients and treat them quickly, but also carry out early tumour screenings and allow for accurate diagnosis and the standardized treatment of patients. “I am proud of the contribution made by my colleagues from the Hunan Cancer Hospital, and I hope the China Medical Team will make full use of the platform together with local experts to improve hospital conditions,” he said.

Ambassador Wu called for continuous communication and collaboration to improve the Sierra Leone-China Friendship Hospital. He further thanked the experts of the 20th batch Chinese Medical Team and their colleagues in the hospital for their excellent contribution to the people of Sierra Leone.

“We hope that the establishment of the remote consultation platform will allow for pathology and accurate diagnosis, and guide standardized treatment for Sierra Leonean patients, particularly cancer patients, which will in turn benefit the people of Sierra Leone," said Hu Jun, Vice President of Hunan Cancer Hospital. 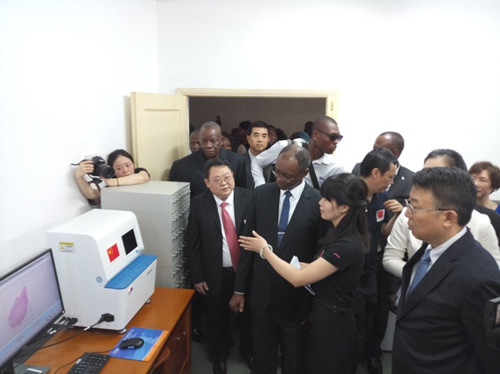 Since 1973, Hunan province has sent a total of 282 experts in 20 batches to Sierra Leone to provide medical service.

Most recently, five pathological experts from Hunan Hospital were sent to Sierra Leone to install related equipment, provide professional guidance to medical staff and carry out test and diagnosis services, as well as make the final preparations for the official opening of the platform project.

Sierra Leone’s Health Minister, Dr. Alpha Tejan Wurie, described the Chinese Government and people as extraordinary in the building of a stronger relationship with Sierra Leone and supporting the country over the years. The Minister thanked China for showing that Sierra Leonean should have confidence in developing its health sector.